The Continental Saxons developed from a subsistence economy, practiced up to the Carolingian conquest in the late eighth century, to become rulers of the Holy Roman Empire a little over a century and a half later. A historian introduces the topic, evaluating the reliability of the sources. Archaeologists then describe the living conditions, especially along the coast where villages have been excavated, and social customs revealed by grave-goods. Legal procedures are inferred from surviving evidence, and the regional economy, based on agriculture and animal husbandry, is reconstructed through the study of vegetable remains and pollen analysis. The birth of urban communities, stimulated by monastic settlements and trade, is followed through archaeological evidence; study of visual art-forms is based on analysis of grave-goods; and in the absence of surviving evidence for poetry, a Carolingian eulogical poem is discussed. Also discussed are Saxon political relations prior to and during the Carolingian conquest; the few signs of traditional religion that can be gleaned from the 'Lives' of missionaries; and Christianity and the activity of religious orders, which eventually brought about the conversion of the Saxons and the introduction of written culture. 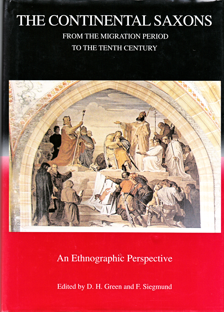